I pay for every product I babble about on this blog.

Hellraiser nail art: for people who want to look fabulous while being tortured until the end of time!*

*NOTE: Chipping may occur after a couple millennia, but I’ve heard that cenobite semen works as a pretty durable top coat. Good luck finding it on eBay! A jerk named GiveMeS0meP1nhead42069 outbids me every. single. goddamn. time.

Would you look at this glorious motherfucker? LOOK AT IT! I wept joyful tears of toxic ichor (the only kind I’m capable of producing) when I saw this stamping plate.

I got mine from dramaqueennails.com, and I had to do some serious work to locate a shop that wasn’t out of stock. I think this plate might be hard to find.

The super-cheap, super-awesome dripping blood nail vinyl on my index finger is from What’s Up Nails. (Yes, I used this vinyl in the Jaws manicure. Just come to accept right now that the drippy blood vinyl is going to get a hell of a workout here at Horror Nails.)

Awwww yeah, it’s time to break some fingers! For cenobites, breaking fingers is a simple, small gesture of affection and encouragement, kind of like a pat on the back between humans.

(“Okay then, so what’s the cenobite equivalent of a back-pat?” is something I know you’re asking, because I’ve bugged your house and I’m listening to everything you say. And the answer is: you don’t want to know what the cenobite equivalent of back-patting is, you fool! If you try to even read a description of a cenobite back-pat, your eyelids will literally grow tiny hands and gouge your eyeballs out.)

You can probably tell that these nails both gave me some trouble. The Pinhead and Lament Configuration images are both very detailed, which means a clear jelly stamper can’t pick them up.

I really wanted these suckers to be centered on my nails, but I can’t center for shit if I can’t use a clear jelly stamper. This meant I had to do something I haaaaaate: make my own nail decals.

Making decals annoys me, so I don’t do it much, which means I never get better at it. And that means whenever I apply homemade decals, they always end up crooked, crinkled, smooshed, or weirdly distorted so that Pinhead looks like he’s whispering my name, promising me immense power and a world where all my foes fall before me, burn, burn, BURN, THE WORLD SHALL BURN…

I made so many Pinhead decals before I could get it right, I kept finding them stuck on random things for days.

Okay, this is where I really started nail arting hard.

In a close-up picture or video, my middle finger looks a bit lumpy and messy, but in person, it looks pretty damn good.

Obviously, I wanted my nail to mimic Pinhead’s skin. I wanted it to have a visibly 3D texture, so that the lines would look like they were carved into the white polish.

For my first attempt, I tried a quilted nails technique, which involves using floss or similar items to push visible lines into thickly applied polish.

That didn’t go so well.

After several failed attempts at quilting and a few bouts of quiet weeping, I decided to try striping tape. I placed the striping tape on top of a black base coat, slapped on a few layers of white, pulled the tape off, and ta-daaaaa!

This was a good start, but it still looked too flat for me.

I painted more white on it by hand to make the “flesh” parts look more upraised (which caused the surface irregularities you can see in close up shots of the finished nail; I’m definitely a novice with this stuff) and then added a mattifying top coat.

After that, it still felt like it was missing something: blood.

I mixed a few drops of red polish with some clear polish, hoping that would make it look like it was wet and glistening against the matte white “skin.” I dragged tiny amounts of it along the lines using a toothpick. Then I finished by adding some silver studs.

Hellraiser imagery almost always has lots of blue in it, so I wanted to incorporate it into this manicure. The blue here is Freeze!, an ancient polish from Sally Hansen’s Insta-Dri line.

I am almost as bad at making gradients as I am at placing homemade decals on my fingers. I spent what felt like three years straight trying to get this gradient to not suck. I always end up with like at least half an inch of polish on my nail, none of which looks in any way blended together.

Someone please save me from my gradient ineptitude:

I’ve watched a ton of tutorials on how to make gradients, yet I am still a member of the gradient-impaired. 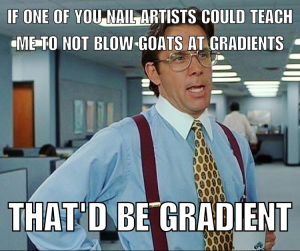